Posted on September 11, 2015 by Derik Schneider 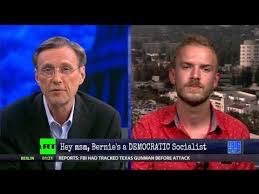 Source: This piece was originally posted at The New Democrat

I believe the best way to differentiate a Socialist, or Democratic Socialist from someone who is way Far-Left and a statist like a Communist, would be to put the two factions in separate groups. Democratic Socialists, which is the mainstream form of Socialists in the world and Marxists. Which is a fringe statist faction about as Far-Left as you get on that side of the spectrum. Bernie Sanders, is a Democratic Socialist. Fidel Castro, was a Marxist at least up until ten years, or so when Cuba started privatizing parts of their economy. But Fidel is still a Marxist on most issues like when it comes to personal freedom, which is he’s against and individual rights.

What you get with Marxism is state-ownership of the entire economy, plus no individual rights. Individuals are essentially subjects, or children of the state with no rights of their own and not even allowed to think and speak for themselves. In a Marxist state the truth is what the states tells you it is. You work and live where the state says you do and I could go on, but I won’t. In a social democracy the job of government is to see that everyone is taken care of, but not to try to do everything for them. Private economy, private ownership, property rights even, but a large central state and welfare state to make sure that no one has to go without anything that they need to live well.

Under a Bernie Sanders Administration lets say, the Federal Government would be bigger, taxes would be higher across the board perhaps, the roles of the states and localities would probably be smaller with more power when it comes to social welfare going to the Feds. But our Federal Republic would essentially still be the same. Federalism would still be alive in America with our three levels of government Federal, state and local. Schools, banks, energy companies, hospitals, wouldn’t get nationalized and most of the economy, or at least a large percentage of it would still be in private hands. But taxes would be higher, even on the middle class and the Federal Government would have more responsibility to see to it that every American is taken care of.
Thom Hartmann: Thom Hartmann Interviewing Thor Benson- Stop Calling Bernie a Socialist